Six Sigma definition article clarifies what six sigma is all about. Six Sigma is a statistical strategy for optimizing company processes by minimizing manufacturing faults and their causes. Six Sigma minimizes manufacturing process variation to improve product quality and increase corporate profit. Six Sigma projects should display by groups of people who are experts in various fields, such as financial analysis, project management, and statistics.

There are three methods to describe Six Sigma:

A unit of measurement

There is a procedure.

A set of beliefs.

Six Sigma by definition is a statistic used to determine the effectiveness of a process.

When discussing process capabilities, 6S is also commonly used. A six-sigma process is one in which the closest specification is six standard deviations from the mean. For example, a circle with 3.4 defects per million opportunities, or DPMO, can alternatively be defined like this. 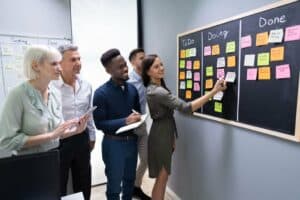 As a methodology, Six Sigma.

The term “Six Sigma” is frequently used to describe a company’s efforts that they are attempting to strengthen its organisational procedures to reach high levels of quality and performance.

Bill Smith, an engineer at Motorola, created the Six Sigma approach in 1986. Honeywell, Allied Signal, and GE followed suit, adopting the technique and concepts. Many of the world’s most well-known businesses have tried or are attempting to incorporate Six Sigma. Six Sigma recently integrated with the concept and tools of lean manufacturing to establish the Lean Six Sigma (LSS) approach to organisational change.

DMAIC is a five-step procedure that serves as the core of the Six Sigma approach (Define-Measure-Analyze-Improve-Control)—applying Six Sigma in various ways, from simple problem-solving to complete organisational change. The DMAIC approach is used in this process, which skilled and licenced individuals carry out. Green Belts, Black Belts, and Master Black Belts are the titles given to these positions.

As a philosophy, Six Sigma is on the concept of “zero defects.”

Six Sigma mean a continuous improvement management concept and measurement (or metric). Therefore, all work classified as a process should improve, and choices should be fact-based and data-driven.

The methodology’s application is where Six Sigma’s main advantages lie.

Regardless of your organisational function, you can use the DMAIC tools to monitor, evaluate, and improve your process to remove waste and flaws.

“Variation is harmful,” said former GE CEO Jack Welch. He meant that customers desire predictability regarding product quality, delivery, and all other facets of their business relationship.

In light of the two benefits listed above, it’s easy to understand how lowering waste, defects, and variety can make your consumers happier – especially if you can translate this into a reduced price based on your lower costs.

Why is it necessary to comprehend Six Sigma?

It will be critical to comprehend the statistical definition of Six Sigma.

The standard deviation is a statistic for evaluating how variable your process is. Because you want to reduce process variation, you’ll need to figure out what’s causing it and work to mitigate or eliminate it.

Deployment in the workplace

It will be challenging to implement a Six Sigma programme in your company. However, understanding all of the moving pieces of a Six Sigma project is crucial to attaining positive results. At JK Michaels institute, we run several lean six sigma courses, including IASSC(International association of lean six sigma certification), yellow belt, green belt and black belt certifications.